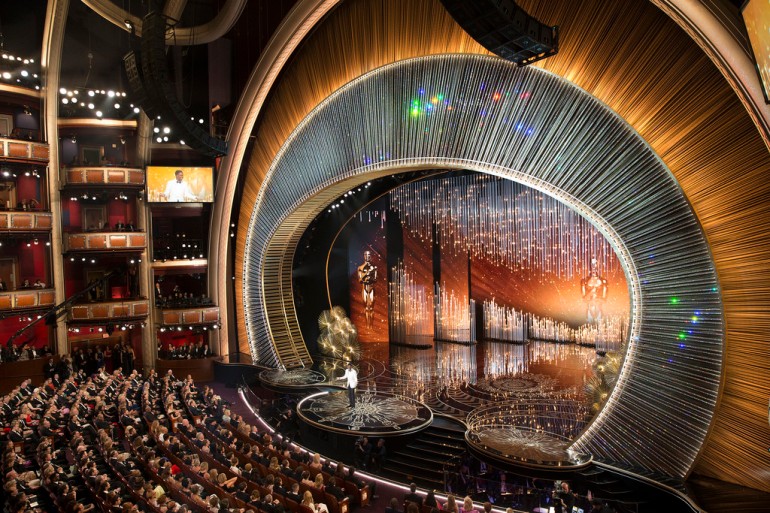 At the 2018 Oscars, a superhero movie was nominated for Best Picture, Best Actor was awarded to a performer for lip-syncing Freddie Mercury songs, and Driving Miss Daisy defied the laws of time and space by winning Best Picture again. If 2019 is as anomalous as 2018, attempting to predict the field is a fool’s errand. In that case, let’s get silly with 25 of the most likely nominees of 2019.

Little is known (you’ll be hearing that a lot) of the upcoming sci-fi drama from director James Gray (The Immigrant, The Lost City of Z). Brad Pitt stars as a man on the search for his father (Tommy Lee Jones), who left on a deep space exploratory mission 20 years prior. Ad Astra’s premature award season release may preclude it from a nomination (nominees tend to see release between September and early December), but stranger things have happened.

Pitt, nominated for 12 Monkeys, The Curious Case of Benjamin Button, and Moneyball, has never won an acting Oscar. Co-stars Donald Sutherland (appallingly never nominated) and Ruth Negga (previously nominated for Loving) could be due for nominations or wins, but it’s too early to tell without knowing the extent of their roles. Unless Ad Astra becomes an Oscar heavyweight, Gray himself is likely one or two movies award from receiving a directing nomination.

A year after Won’t You Be My Neighbor?, the Fred Rogers documentary, Tom Hanks is on board to play Mr. Rogers in the closest thing to an early lock for nominations for Best Picture and Best Actor. Fans of the FX series The Americans will be pleased to learn that Matthew Rhys will star opposite Hanks as a disgruntled journalist asked to profile Mr. Rogers.

While only five women have been nominated for Best Director, A Beautiful Day in the Neighborhood’s Marielle Heller could be one of several with an opportunity to make history in 2019.

Do the betting markets have odds on Best Animated Feature yet? Frozen 2 is the safest investment since Frozen ran away with the award in 2013.

Based on the 2013 coming-of-age novel by Donna Tartt, The Goldfinch stars Ansel Elgort, Ashleigh Cummings, Jeffrey Wright, Nicole Kidman, Luke Wilson, and Sarah Paulson. Elgort’s a contender for Best Actor, but Best Picture is the more likely. Director John Crowley (Brooklyn) could also receive some love from the Academy, but like Gray, he’s a few films short yet.

In The Good Liar, Sir Ian McKellen stars as a conman who falls in love with his latest victim (Helen Mirren). McKellen, beloved for his activism, Shakespearean work, and illustrious career, has been nominated for two Academy Awards. It’s time for the 79-year-old to win one.

Details around Harriet, Kasi Lemmons’s Harriet Tubman biopic, are scant. Lemmons herself could see a Best Director nod, but given the Academy’s historic attitude toward women behind the camera, I find it unlikely, especially for a rookie director. Star Cynthia Erivo (Widows, Bad Times at the El Royale), meanwhile, has a good shot at Best Actress, and the Academy’s infatuation with period pieces puts Harriet in good standing for Best Picture.

If a 2018 nomination for Cold War director Pawel Pawlikowski and the recent deluge of Mexican filmmakers taking Best Director (five of the last six, but who’s counting?) are any indication, French artiste Claire Denis could earn a nomination for her first English language film, High Life. Denis also represents another woman with a chance to break into the male-dominated category.

High Life, the second science fiction film on this list (don’t count on both of them receiving Academy recognition), stars indie-darling Robert Pattinson with Juliette Binoche and André Benjamin (the artist formerly known as André 3000) in supporting roles. If High Life lives up to the hype, all three could see acting nominations.

As of publication, High Flying Bird is the only movie on this list that’s been released. That hurts its chances at a Best Picture nomination, and with Roma’s surprising Oscar loss and Steven Spielberg’s recent comments, apparently so too does its presence on Netflix. Director Steven Soderbergh (Sex, Lies, and Videotape, Ocean’s Eleven) may earn recognition for the movie’s unorthodox style, shooting the entire thing on an iPhone 8.

Martin Scorsese’s expensive, special effects-heavy biographical mob movie is going to break ground one way or another. Hollywood’s anti-Netflix bias could play a factor here, but Scorsese and his cast might be too big for conventional thinking.

Digitally de-aging many of its stars, including Al Pacino, Robert De Niro, and Joe Pesci is going to send ripples through Hollywood. A similar tool was used (to uncomfortable effect) on Carrie Fisher in Rogue One: A Star Wars Story. Three years since Rogue One, the technology may look realistic, or it may be deeply unsettlingly (smart money is on the latter). I haven’t talked much about the technical categories to this point, but there’s a version of this where the Academy awards The Irishman for Best Visual Effects, anticipating an industry-altering change, as they did with Avatar in 2009.

If you’re looking for a superhero film to recapture the awards fervor generated by Black Panther, look no further than Warner Bros.’ upcoming stand-alone Joker movie starring Joaquin Phoenix. Spider-Man: Far from Home, Wonder Woman 1984, and Avengers: Endgame could sneak into the conversation, but a dark, Phoenix-led thriller about the most infamous supervillain is a better candidate.

Potentially ignored by the Academy for its release date, production size, and subject matter, The Last Black Man in San Francisco was the most esteemed film at this year’s Sundance festival. See it even if it isn’t nominated.

From the writer-director of The Witch comes The Lighthouse. One of three horror films that could earn a nomination in 2019, The Lighthouse stars Willem Dafoe (whom the Academy is desperate to award an Oscar) and Robert Pattinson (did I mention that he’s an indie-darling now?).

Black Panther allowed Disney to get its mousy foot in the Best Picture door. Between Avengers: Endgame, The Lion King, and Star Wars: Episode IX, you can envision them kicking that door open in 2019. Director Jon Favreau could collect a Best Director nomination for a photoreal remake of one of the most revered animated movies of all time.

The acting categories are another murderer’s row featuring the likes of Donald Glover, Beyoncé, and James Earl Jones. Speaking of Beyoncé, Best Original Song could turn into a showdown between Jennifer Hudson and Taylor Swift (Cats) and Queen Bey herself. The 2019 rendition is rumored to contain just four songs from the original movie.

If Long Day’s Journey into Night sounds familiar, that’s because Eugene O’Neill’s play has been adapted for the screen more than six times. Director Bi Gan’s 2019 Chinese adaptation will be a force to be reckoned with in the Best Foreign Language Film category.

Hereditary writer-director Ari Aster is back to scare the pants off of us again with Midsommar, a horror film about a couple’s picturesque vacation gone awry. If Midsommar clears the high bar that Aster set for himself, the film deserves Best Picture consideration, but horror films are disregarded by the Academy. Jordan Peele won Best Original Screenplay for Get Out, so that same prize is Aster’s best hope.

Quentin Tarantino claims that he’ll only direct 10 movies in his career. Counting the Kill Bill series as one movie, Once Upon a Time in Hollywood brings that total up to nine. With Tarantino rumored to direct the next Star Trek movie, this could be the Reservoir Dogs director’s last realistic chance at Best Director. Nominated for Pulp Fiction and Inglourious Basterds, he’s never won.

This presents two potential 2019 Oscar scenarios: 1) Tarantino’s violent, stylized work and the sensitivity around Once Upon a Time in Hollywood’s subject matter (the Charles Manson murders) and the controversy surrounding the director (including his use of various slurs) mean that Tarantino’s best opportunity is already in the rearview mirror. 2) The ceremony is a referendum on Tarantino’s career; he wins Best Director and Best Original Screenplay, some combination of Brad Pitt, Leonardo DiCaprio, Margot Robbie, Bruce Dern, and Dakota Fanning win acting awards, and the film itself may even secure Best Picture.

The Report stars Adam Driver as Senate staffer Daniel Jones and Annette Bening as Senator Dianne Feinstein as they investigate the CIA’s interrogation methods (torture) after 9/11. Bening (nominated for four Academy Awards) is an early favorite for Best Actress. The subject matter is political enough to earn a place in the discussion for Best Picture and Best Original Screenplay.

Carrie Fisher could receive a posthumous Best Supporting Actress nomination depending on her role in the movie. A Best Picture nomination isn’t out of the question, either, as Star Wars was nominated for Best Picture in 1977, long before it became a multi-billion dollar franchise.

Uncut Gems is a New York-based crime thriller from the Safdie brothers, the directors of 2017’s explosive Good Time. Although Good Time did not receive any nominations, Uncut Gems should be a more high-profile feature. It stars Adele Dazeem (Idina Menzel) (sorry), Lakeith Stanfield, and, most notably, Adam Sandler in the ever-popular late-career dramatic role.

After Get Out earned Best Original Screenplay honors in 2017, the sky is the limit for writer-director Jordan Peele and stars Lupita Nyong’o and Winston Duke.

The Academy can right some wrongs to Richard Linklater by awarding the co-writer and director with Best Director and/or Best Adapted Screenplay for his work on the adaptation of Maria Semple’s novel of the same name. Cate Blanchett could acquire another acting nomination for her portrayal of the titular role.

Director Joe Wright (Atonement, The Darkest Hour), Amy Adams, and Brian Tyree Henry could win for Best Director, Best Actress, and Best Supporting Actor, respectively. Aside from Adams who has been nominated for a whopping six Oscars, I find wins unlikely for The Woman in the Window. The bizarre politics surrounding author of the original novel Dan Mallory may make the film adaptation too toxic to touch. Who am I kidding? This is the Oscars.

Seven others with early award buzz: Blinded by the Light, Fair and Balanced, Ford v. Ferrari, The King (2019), The Last Thing He Wanted, The Laundromat, Tolkien

Matt Stephen is a communications professional and proud University of Central Florida alumnus located in Washington, DC. A fan of film, television, and science fiction, he spends much of his free time enjoying (and writing about) those things. View all posts by Matt Stephen